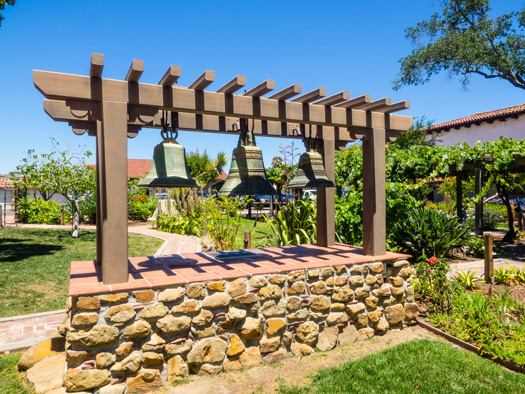 The San Luis Obispo Mission (Mission San Luis Obispo de Tolosa) is one of the oldest in California. It’s located on the Central Coast in the city of the same name. There are several reasons you should visit the mission in your travels across the state. Here are four of them.

Mission San Luis Obispo de Tolosa is one of 21 Spanish missions in California, and it was founded by Father Junipero Serra. Opened in 1772, it’s also the fifth oldest. The town that was built around it is one of the state’s earliest European-founded communities.

Visitors can see how the mission has grown and shrunk over the decades. Maps and diagrams show where structures such as barracks for soldiers and single women once stood. Additional information details how the mission thrived during the Mexican War of Independence and how it crumbled before annexation by the United States.

The mission isn’t only a historic monument. It’s also still an active church that holds regular services. Most of these services take place in the mission’s sanctuary. In some cases, mass is held in the gardens that surround the building. Additionally, the mission’s bishop and staff provide several ministries to help residents of San Luis Obispo and the county in times of need.

Some California missions are only open to members, while others are no longer active and stay closed to the public. Mission San Luis Obispo de Tolosa remains open at all times. Even when services are in progress, the grounds and the museum are still accessible by visitors. The mission has rarely been closed to the public. Even when that happens, visitors are still able to park nearby to examine its exterior.

If you have time, stop by the mission’s museum. Based in quarters formerly used by Franciscan priests, it contains displays that track the history of the San Luis Obispo region. This includes data on the Native Americans who called the area home prior to the influx of Spanish and Mexican people. If you’re still intrigued, guided tours are available. After enjoying a day trip that includes exploring the mission, you’ll be ready to return to your hotel near San Luis Obispo eager for some rest and relaxation.

4. It Has a Beautiful Garden

A highlight of the mission is its garden. In fact, it’s an integral part of the campus and its daily operations. Services, wedding ceremonies, and funerals have been held in this space for many years. When it’s not filled with parishioners or other guests, the garden is used for meditation and contemplation. Visitors can explore areas like the grape arbor, which is a reminder of the vineyards that covered the area around the mission for decades, or they can simply sit on the shaded benches for a welcome rest.

The historic mission is just one of the many amazing places you’ll want to explore in San Luis Obispo. With so much to see and do in SLO, you’ll want to stay for several days, so make your reservation now at Sands Inn & Suites, a premier San Luis Obispo hotel. The whole family will love our pet-friendly inn, which features an on-site gym, a heated outdoor pool and spa, and free WiFi. Our friendly team is dedicated to making your stay a memorable one, so call us to reserve your room today at (800) 441-4657.