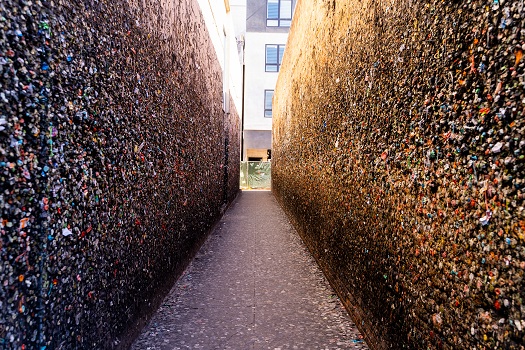 San Luis Obispo is known for its vineyards, nature preserves, sweeping coastline, laid-back atmosphere, quality of life, Spanish Mission architecture. and gorgeous landscapes. Out of the many attractions you can enjoy while staying in San Luis Obispo, the following are highly recommended for travelers who like to think outside the box during their vacations.

As the name of this downtown landmark suggests, this is a narrow passage where the walls are completely covered with discarded chewing gum. Tourists from around the world come here to be amazed at just how many pieces of bubblegum have been stuck here since around World War II. Prior to the alley’s becoming a highly unusual tourist attraction, the city attempted to clean up the site without much success. Should you feel inclined to reach out and touch the walls, please do so with gloved hands.

Located not far from the San Luis Obispo DMV office, this pyramid is a Masonic symbol as well as a tomb. It’s part of the local cemetery, and it’s a memorial to the sad loss of Cora Russell Dorn and her son. Former District Attorney Fred Dorn commissioned this Freemasonry-inspired granite pyramid in 1905. It’s adorned with mysterious symbols, and it was supposed to welcome Fred Dorn upon his death, but he was buried elsewhere, and the tomb was eventually sealed.

As one of the greatest films ever made, Citizen Kane is not only masterful but also extremely intriguing because it deals with some of the strangest episodes in the life of William Randolph Hearst, one of California’s quirkiest business magnates. Even though Hearst was born with the proverbial silver spoon in his mouth, the riches he generated for his family were astronomical thanks to his penchant for controlling news media and influencing politics through countless newspaper and magazine acquisitions. Even though Hearst lived a public life, he was an enigma until the very end of his turbulent life, and you can learn more about him when visiting the Hearst Castle Museum in San Simeon. After taking a day trip to enjoy this fascinating treasure, you’ll be ready to return to your boutique hotel near San Luis Obispo for some rest and relaxation by the pool or spa.

Motor inns are a staple of American culture, and San Luis Obispo is where the first one was built in 1925. The Milestone Mo-Tel was a swanky lodge featuring Spanish Colonial architecture, and it was intended to become a national chain. Things didn’t work out for the business partners behind the idea, but car culture ended up taking over California, and quite a few motels would later open all across the Golden State. What remains from the world’s first motor inn is an old bell tower with a sign that has been carefully preserved.

San Luis Obispo has so many interesting attractions you won’t be able to enjoy everything on your must-see list in just a day or two, so reserve a room for several days at Sands Inn & Suites, a premier San Luis Obispo boutique hotel. Bring the whole family to our pet-friendly inn and enjoy our on-site gym, heated outdoor pool and spa, and free WiFi. Our staff is dedicated to making your stay a memorable one, so call us to reserve your room today at (800) 441-4657.