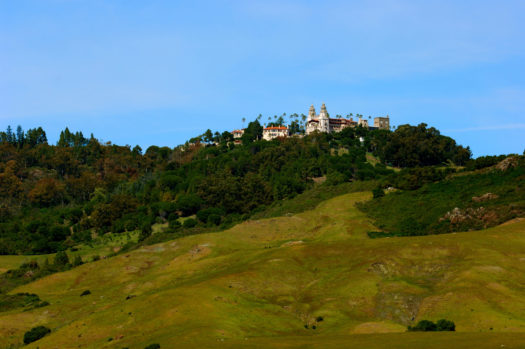 William Randolph Hearst is a name synonymous with newspapers and publishing as well as politics and Hollywood. This fascinating East Coast tycoon was born into wealth but amassed his own fortune through the twenty-plus newspapers he owned and published. Hearst was fascinated by castles, and he made a vow that he would one day build his own.

Thus sprang the idea for Hearst Castle, which sits on The Enchanted Hill, or La Cuesta Encantada, as Mr. Hearst originally called it. It’s a magnificent tourist attraction located in San Simeon, CA. If you get the chance, stay just a 45-minute drive away at a boutique hotel near San Luis Obispo and plan to see all of the following features of Hearst Castle in a day or two.

Casa Grande, or “The Big House”

This is the main mansion on the 250,000 acres of land that encompass this historical treasure. The “Big House” itself takes up 68,500 square feet, something few visitors can see in a single day. That doesn’t include the cottages or the guest house Hearst later added to the property to accommodate guests for his opulent parties. The castle itself appears to be part of the ancient landscape that is Southern California. However, its interior will remind you much more of ancient European castles.

Within its walls is a massive “assembly” room in front of a marble fireplace so large six men could stand abreast within it. There’s a library that looks more like something belonging to an Ivy League school than a mansion, which makes sense, given Hearst’s Harvard degree and affiliation with the university. The bedrooms are fit for kings and queens and remind one of the bedrooms of the Sun King, Louis XIV of France, and his palace at Versailles.

Speaking of Versailles, it’s possible Hearst got the inspiration for his own extensive gardens from the famous gardens at the luxurious French palace. The gardens are lush, well manicured, and stunning in any season. Many weddings are booked each year in the gardens alone.

Most people come to see the castle itself, since it’s a marvel to behold. The best tour of all is the holiday tour, when the castle is decorated for Christmas as it would have been during Hearst’s residency. You can take many other tours of the castle, grounds, and gardens if you so desire.

Hearst Castle is a national treasure that offers a fantastic experience for the whole family, so make sure to put it on your vacation itinerary when you stay with us at Sands Inn & Suites. We’re the hotel San Luis Obispo visitors return to again and again because we offer all the amenities our guests need for a relaxing family vacation, including an outdoor pool, an on-site gym, free WiFi, and flat-screen TVs with digital cable. Call us at (800) 441-4657 today to reserve your room or suite.